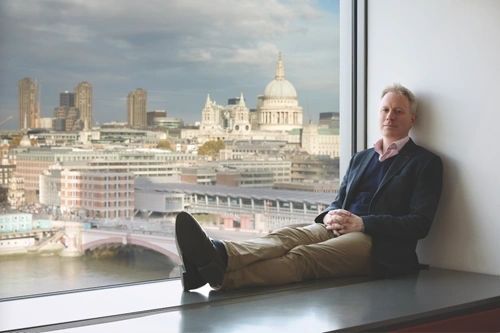 Schooled in hospitality management and digital communications, Dominic Walters has worked with companies on the seaways, railways, skyways and now even in space. He discusses his journey to Inmarsat Aviation with Brittany Golob

Dominic Walters’ first experience in communications was, quite literally, a train wreck. At 19 years old, Walters – now vice president of marketing communications and strategy at Inmarsat Aviation – was sent to Peru by a small London PR agency to work with the Peruvian government ahead of the first ever Earth Summit to be held in Rio de Janeiro. Bringing together environmentalists, government officials and corporations, Walters was on his own in his first role in public relations.

But his plans were sadly derailed when a train crash caused the deaths of four passengers and disrupted the careful communications plan he’d mapped out ahead of the summit. It was a difficult situation for the young Walters to find himself in, but it was one of the instances that determined what track his career would inevitably take.

Finding a natural affinity to crisis mitigation, Walters managed the crisis before coming back to the UK at the end of his placement. The London native, however, would swiftly head back to the hotel management school nestled in the Swiss Alps, about 40km north of the Matterhorn. Les Roches was home to Walters for three years as he underwent a hospitality management course that prized military precision, hard work and a broadly eclectic education. It routinely turns out global leaders in hotel management.

For Walters, though, the approach and the opportunity for internships paved a different path away from the shadow of the Alps. The course variety available at Les Roches allowed him to build a broad foundation of study, one that has informed his career in communications.

Though he spent time working in tourism during his course, Walters discovered a passion for marketing, brand and communications. He returned to the UK after a stint with the Carlyle in New York and took up a role at public affairs firm LSA. It was here that his true education in communications commenced. The agency ran BP’s communications across Europe. “I suddenly found myself, aged 21 or 22, as the account manager for an amazing brand,” Walters says. A merger with Mobil in Europe prompted Walters to facilitate a huge amount of marketing spend, customer communications and develop a pan-European strategy for its petrol station franchise.

That kind of large, transformation project is one that recurs throughout Walters’ career. “You begin to learn about yourself. Being thrown into very tough situations puts you on an accelerated learning curve that you don’t often get in life. You’re thrown into the deep end; it’s sink or swim. And most of my early life was a sink or swim situation, which has given me the most amazing opportunities to work with some of the biggest brands in situations which naturally, I wouldn’t find myself in if I’d followed a traditional path,” he says.

How does he cope? “I’m pretty bloody-minded and demanding at the same time.” That determination is complemented, he says, by a work ethic straight out of the military school of thought. He gets into the office with the sun, a habit that began at Les Roches where students were expected to rise early and bake, clean or work in the Alpine university which was run like a hotel itself.

It’s an approach that has gotten Walters through increasingly tough roles at increasingly complex businesses. But it’s also what helps him throw himself into new ventures with gusto. One such project was as the founding partner of a digital portfolio platform for amateur photographers at the height of the Dotcom boom. Photoshot grew quickly and Walters moved to Milan to facilitate its expansion. But the crucial flaw that plagued countless 1990s internet ventures is also what hindered Photoshot’s chances in the end.

“In those days, no one was that interested in business models, in return on investment,” Walters says. “It was global domination. It was what Dotcoms were all about – global market share. Grab users, grab numbers, grab visitors, grab members, because that’s where the true value was.” And so the bubble burst, leaving Walters with a seven year lease on an office building in Milan before at last returning to London as a freelancer.

From the lows, though, came the highs. BAE Systems – in the days when defence was a bad word and workplace morale at the aerospace and defence firm was low. Walters took on freelance work at first and soon became involved in the relocation of 3,000 employees from one office to another. That role the led to another requiring him to develop an internal communications strategy  to support a company-wide IT transformation programme impacting 35,000 employees at BAE Systems “It was a massive change programme where we had to engage with over 72 different sites across the UK, at all different security levels, all in different parts
of the business.”

The success of that change programme was the start of a four year permanent role at BAE Systems first as group digital manager then as group head of brand and corporate promotion. Walters was part of a period of internal professionalisation among the comms team. He was first charged with rehashing the entire digital communication strategy for all of the company’s external communications. For a B2B organisation in the mid-2000s, digital was not really front of mind in comms. But with Walters’ history in corporate comms and crisis management, he knew the impact a good website and strong strategy could have on a business. Thus, he worked on consolidating the 50 corporate websites into one, which naturally led him to work with the
BAE Systems brand.

“We were relaunching and refreshing the brand so this was a perfect time to integrate a digital and social media strategy. We introduced the first governance policy on social media in the company. We started looking at how you educate across an organisation which, at the time, had about eight different business units, each of them with their own comms teams,” Walters says. The change was just in time because with the late 2000s came an investigation into BAE Systems from the Department of Justice in the US.

The digitally-able comms team and refreshed brand took to the task and helped change the perception of BAE Systems by focusing on what the company brings to the British economy, to the training of engineers and to the development of new technology. That messaging is still the spirit that carries through BAE Systems’ communications today.

But in 2008, Walters saw it as a job done well. “I loved my digital transformation, I loved the change period; I loved being head of brand. But actually it became all a bit of business as usual and I need craziness and excitement.” With that in mind, he pursued a Master’s in digital communications at the London School of Business and Finance, which, at the time, was the only London university offering such a course. What he thought would be an investment in a promising future in digital turned into yet another challenge to overcome when the world recession hit in 2008.

The next challenge came through a role at EY in which Walters worked on a change transformation programme for Network Rail. The internal refresh affected the IT systems of 1,500 sites across the UK and required a new approach to internal communications, all of which was business critical. “And, it impacts every other business that works on the railway and every other person using them,” Walters adds. Crucially, it drove home the value that professional communicators bring to major transformation programmes and management consultancies. “It was a validation of communications because when it’s done well, it really shows it’s not just something that anyone can step into. Experience matters,” he says.

From his education at Les Roches through the 2015 completion of his work with EY and Network Rail, Walters has gotten just that. His experience has been a whirlwind of activity, crisis management, corporate change and communications development. But rather than it exhausting him, Walters is exhilarated by it. He sought his next challenge with a company that has a solid history, a promising new business and the need for a lot of TLC in the communications, brand and marketing departments.

Walters, so far, has been up for the job. Inmarsat Aviation is an airline connectivity solution providing wifi to passengers at 35,000 feet, with a start up mentality, born from prominent satellite communications company Inmarsat. However, the challenges have been plenty – from low awareness among customers and poor brand recognition across aviation to a changing go-to market strategy and an agressive competitive landscape. Yet in just two years, Walters has led his team through a process of transforming the fledgling brand for the better. The change process is ongoing, but the company is already seeing the positive results of Walters’ team’s hard work. And that is a story which will be discussed in detail in a forthcoming issue of Transform magazine.

A career that began with a train crash is now dealing with rocket launches. “This journey that I’ve been on has certainly not in any way been planned. I have just been, I suppose, amazingly privileged to find myself taking on projects and programmes and campaigns that are really important to individual businesses, that are at various stages of their lives. It has all got to be about transformation and change. There has got to be a problem, there’s got to be something that we’re trying to fix, solve, integrate into for either the customer or the business and then I’m a very happy boy, and that puts me in heaven.”